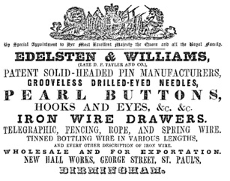 In 1888 Watchbury House was bought by Francis Williams.  At that time it was a large house extended in the early 1870s to include a Lodge in Church Lane and a long drive through landscaped gardens.   The estate also included a number of cottages, farms and over 200 acres of farmland.

According to the 1851 census the Francis Williams was the son of John Alfred Williams who was a ‘maker wires and pins’.  This is a copy of an advert from Grace’s Guide and John A Williams was almost certainly the Williams of this company during his working lifeFrancis Williams was born in Rodborough near Stroud in Gloucestershire in 1845.

At the time of the 1851 census he was aged 6 and living in West Bromwich with his parents and six siblings including older brother Wilfred, born in 1843.  In the 1861 census Francis was a pupil at a boarding school in High Street, Amersham Buckinghamshire.

At the time of the 1881 census Francis Williams was described as a Pin Manufacturer employing 347 employees.  He was living in one of the large elegant Birmingham Victorian houses, 35 Calthorpe Road in Edgbaston,.  Many of these Calthorpe Estate  houses survived until the 1960s when they were replaced by offices and smaller houses.

According to Grace’s Guide, D. F. Tayler and Co, was the name registered as a public company on 23 March 1886.  It was created from the merger of Edelsten and Williams with the original business of D F Taylor and Co.    It is probable that Francis Williams was still employed as a Director or at least owned many of the shares.   He certainly maintained contact with the firm.

The 1891 census shows that he and his family, now comprising his wife Mary, son Basil and daughter Margaret, lived in Watchbury House in Barford.   During his time there he became involved in the local church and had been made a Justice of the Peace in Warwick.

According to reports in the local newspaper, The Warwick Advertiser, his family spent some periods away form Barford.  Sometimes during these absences he allowed other people or even families to stay in Watchbury.  For example in September 1897 it was reported that Mr and Mrs Francis Williams had gone to Banchory in Scotland. A month later Mr and Mrs Marshall Field had taken up residence in Watchbury.  The following June it was reported that the Fields were going to live in  Wellesbourne Hall and that Mr and Mrs Williams  ‘will take up their abode in Watchbury again’.   There are several such reports their period of ownership.

At one such occasion he and his wife were staying in the Hotel D’Orsay in central Paris.  He died there on 29 April 1901 aged 56.  His body was brought back to Barford where he was buried in St Peter’s Churchyard.  The newspaper report of his funeral shows that there were many people who attended.  Amongst them were his brother Wilfred and others from his family, local residents including Joseph Arch, the local gentry and employees from D F Taylor and Co.

The 1901 census, taken about a month before he died, shows that Robert Emmet with his wife, Louise and family of 3 young children and his wife’s brother were living in Watchbury at the time.

The Emmet family had a family history from their time in Ireland at the end of the 18th century.    Robert Emmet was a descendant of Thomas Addis Emmet the brother of the Irish patriot, Robert Emmet, who was a leader of the 1798 rebellion in Ireland and who was executed then.    Thomas Addis Emmet escaped to America in 1798.   He went on to have a distinguished career and to found a very successful dynasty of barristers and physicians.  The Robert Emmet who lived in Watchbury in 1901 named his son, Thomas Addis, after his ancestor.

Louise, whose maiden name was Garland, and her brother Charles were members of one of the wealthiest New York families of the 19th century. Their father was the co-founder of the National City Bank in New York.

The Emmets employed three Irish living-in nursemaids presumably brought with them to look after their children.  Apart from them, it is likely that Watchbury would have been offered as a fully staffed household rather than Louise Emmet having to find their own staff as strangers to the area.  However from the 1901 census it shows that there were only two local people employed as living-in servants.  One was the Footman and the other was a Scullery Maid – Domestic who was named as Harriet E Baldwin.

The following information was provided by William Burnell, the grandson of the person recorded as Harriet E Baldwin. He has collected information about the history of his family which originates in Southam.

“Emily Jane Baldwin was born in Southam 1884 and baptized there in 1885 so though in the census her age was given as 21 in reality her age was nearer 17.

The following is from family gossip that is handed on by my father and uncles and Aunts.

My Grandmother worked in the kitchen and was a wonderful cook, She could cook any Game dish.

My relations said that when Gran had a day off or holiday she would walk from Barford  to Southam , Sometimes she would borrow a bicycle and on occasions the chauffeur would take gran home.   As it was 1901 there were not many cars on the road especially around Southam.  So for Gran to come in a car was something special.

Gran was born in the cottages in Abbey Lane (Crow Lane) . The road is by the side of the Abbey – just off the Warwick St/Leamington Rd down from the parish church. The cottages were demolished in 1961 just after Gran died so she was born and died in the same road.  My Gran was the 7th Child of William & Elizabeth Baldwin.  We do not know how gran came to work at Watchbury house, But gran was Church of England and in 1908 gran married William Thomas Burnell who was catholic so they were married at the Registry office.  Our grandfather had his own plumbing business

around Southam.  He followed his father into Southam Fire brigade and he was the engineer in the brigade. Our family from my great grandfather to my father were on the Parish Council and Southam Town Council.”

The relationship between the Williams family and the Americans became much closer than landlord and tenant because Charles Garland married Margaret Williams, the daughter of the now late Francis Williams, in St Peter’s Church in 1903. The happy couple were waiting at the alter but the necessary marriage license did not arrive in time so they had the reception and were married a few days later.

The Williams family sold Watchbury  by auction in February 1903.

After leaving Watchbury. Emmet and Garland lived in Ashorne for a while. Charles Garland had Moreton Hall built on some land he bought and which was finished in 1909.   It is now Moreton Morrell Agricultural College. Robert Emmet had a large house built at Moreton Paddocks. Only the stables remain of this property.

Charles went on to build a large house at Moreton Paddox a few miles away on the site of an earlier large house for his sister.  This was later used as a management training place of the British Iron and Steel industry.  I was part of a business group that ran a weekend course there in 1964.   I remember being told on arrival that the place had been built for a wealthy woman who had always wanted to live in an ‘Elizabethan Manor’ so her brother had one built for her.  And now, since 1982, I have been living in a part of Watchbury House where it all started! What a coincidence.

Ken Hope with material from Bill Burnell and Ann McDermott- 2020