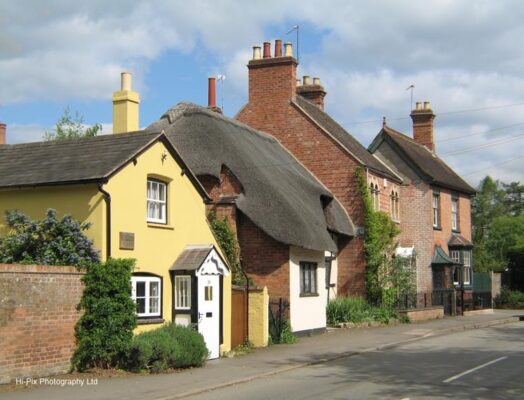 He joined the army, the HM 51 Regiment of Light Infantry, in 1858 at the age of 15. His Brother George also joined in the same year.

By 1869, he was with a detachment of 51st based at Portland Barracks in the Verne citadel, isle of Portland, Dorset (Verne citadel was built in 1860).  They were responsible for keeping guard over the convicts working in the Admiralty Quarries and at the Verne.

On 13th March 1869 he married (Sarah) Jane Love, the daughter of a stone mason from the Isle of Portland.  On the marriage certificate Thomas was recorded as a musician in HM 51st regiment.  In 1871 Sarah and the children were living with her mother.

At this time Thomas must have been overseas on active duty.

By 1871, he had two children, Martha Lilian, who was born in Portland in 1869 and Florence Asenath (named after his wife’s mother Asenath). Thomas and Sarah went on to have eleven children, four of whom, Thomas Claud, Louise, Michael and Mabel were born in Barford.

Thomas was discharged from the army after 13 years 10 months service on the 9th February 1872.

By 1874 his half-brother Frederick Charles was also a policeman.

Thomas could read and write. He was five foot eight and a half inches tall with brown hair, grey eyes and fair complexion and was of slender build. He had a scar on his left knee.

At the end of 1872 Thomas had a job working for Dr. George Mackenzie Bacon in the Fulbourne pauper lunatic asylum, near Cambridge. Presumably he was a guard.

On the 6th January 1873 he was appointed as a police officer with the Warwickshire Constabulary and was attached to the Stratford upon Avon division on 17th January 1873. It is likely that PC White and his family came to live in the Police House in Church Street, Barford at this time. 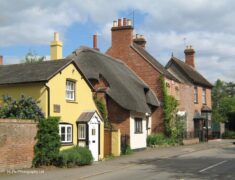 His warrant number was 948. Thomas was transferred to Kenilworth on 29th October 1876 but newspaper accounts indicate that he was still policing Barford at that time.

Barford crimes of the 19th century

There are details of some of the cases that PC White bought to the court during his time in Barford, as reported by the newspapers.

In November 1876 he gave evidence of arresting a man with a bundle in a handkerchief who was acting suspiciously. In the bundle was a rabbit that the man said he had bought. The case was dismissed as PC White did not see the man catch the rabbit.

PC White brought a case against E. Jenkins which also did not proceed. He had summoned Jenkins for riding a bicycle on a footpath but by the time the case came to court Jenkins was in the Isle of Man.

The unruly pub customers of Barford

In May 1878 PC White summoned a labourer for ‘having a little drop too much’ and being drunk and disorderly in Barford. Defendant was using ‘very bad language and challenging a man to fight.’ When the PC thought they had ‘tapped each other’s noses’ enough, he tapped the man on the shoulder and told him to go home. The defendant said to the PC, ‘Mr White if I was you I would put an end to this’.  The defendant was fined seven shillings.

-There was general agreement in the court that the conduct of the men coming out of the pubs in Barford was awful and a stop needed to be put to this.

In September 1877 he gave evidence in a court charge against James London, landlord of the Wheatsheaf Inn, High Street, Barford. P.C. Thomas White stated that on the day in question he visited the defendant’s house and found a man, named Willis, drunk and fighting in the yard. The landlady was there and doing her best to get the man out helped by a man Mr. London had left in charge. PC White induced Willis to go away and gave him a quart of beer. The Bench dismissed the case as there was no dereliction of duty on the part of the landlord.

A Policeman with sensitivity to local issues

In the accounts of the cases PC White was involved in he comes across as a caring policeman with an understanding of human frailties. As reported in the newspapers of the time many of the crimes committed were poaching, due to poverty. The landlords and those with access to the river claimed all the wild animals, such as rabbits and fish as their own. Joseph Arch, in a speech in parliament, when he was an MP said that ‘if a rabbit came into his garden to eat his lettuce, it was his rabbit’ but the landlords of the time did not agree.

Thomas was again promoted, this time to Merit constable on 30th March 1881.

In the 1881 census Thomas Charles White and his family were living in the Police House in Church Street, Barford (now know at Station House.)The children listed in the census are Martha (11), Florence (9), Thomas (5), Louisa (2) and Mabel (6m).  The bars on the basement cell are still visible in this house which is now a private residence.

This Police House was close to the home of Joseph Arch and his family. Joseph Arch founded the Agricultural Workers Union in 1872, and he went on to become a Member of Parliament. At the time, when the White and Arch families were neighbours, Joseph Arch was involved in agitating for better conditions for farm labourers and there were many people, some famous, who visited the Arch home.

The White children would have attended St Peters Church of England School in Barford. The schoolmistress, Ellen Matilda Stark, lived just up the road in Church Street.

By the 1901 census Thomas Charles White was retired and was a publican living at 108 Hope Street, Birmingham. The only pubs in Hope Street were the Albion and the Baltic.

His daughter Mabel was a waitress, and his other daughter Claribel was a barmaid.

Thomas Charles died in 1909 at 5, Primrose Avenue, Sparkhill, of heart failure. Percy White was living with him at the time.

He left all his money to his daughter Claribel, who is listed in the 1901 census as a spinster.