You are here: Home>Streets>Keytes Lane>Bigamy at Barford - George Blackford Hewitt 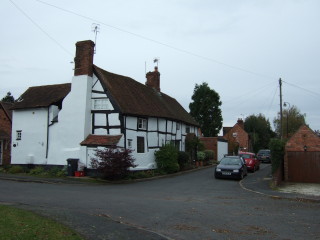 Emma Willis (my 3 x Great Aunt) was born in 1862 in Barford, and was baptised in the Parish on 28th December 1862. She lived with her parents and three sisters in Keytes Lane, Barford, before entering domestic service as a laundress. At the age of 37 she married bachelor George Blackford Hewitt, a labourer from Barford, on 14th October 1899.

However, all was not as it seemed!

The couple lived together until July 1900, when George deserted his wife. By August, a warrant was issued for his arrest in the Police Gazette – on the charge of bigamy!

George was born illegitimately in 1866, Barford, to Mary Hewitt, who later married and had further children with Barford man William Nicholls. George had previously married in Ledbury, Herfordshire, on 6th February 1898 to widow Sarah Ann Bowen nee Banks. He gave his name at this marriage as George Nicholls. He abandoned his first wife before moving to Barford and marrying again using his birth name.

He was arrested when leaving Worcester Gaol, where he had been serving 6 months with hard labour for ‘house breaking’, under the name Henry Smith.

In the Leamington Spa Courier, 19th April 1901 it was reported:

‘George Hewitt, a labourer, recently residing at Barford, was charged with bigamy.  In 1899. Edith Kate Davies, of Newtown, Ledbury, said she was bridesmaid to Sarah Ann Bowen, of Bromsgrove Street, Birmingham, at her marriage with the prisoner at Ledbury. He gave his name as George Nicholls.

Ann [Emma] Willis, of Barford, stated she was married to the prisoner at Barford, on the 11th October 1899. Prisoner gave his name as George Blackford Hewitt. They lived together until June 1900 when the prisoner left her.

Prisoner was in the employ of Mr. Robinson MP at the time of the marriage. PC Dawson of Barford stated that he arrested the prisoner when he was coming out of Worcester Gaol that morning. When charged, prisoner replied ‘I must have been mad at the time’. Prisoner was committed for trial at the Assizes.’

There were also articles in other local newspapers, such as the Worcestershire Chronicle, and even as far afield as Liverpool!

George was tried in July 1901, and in the Leamington Spa Chronicle 26th July 1901 it was reported: ‘George Blackford Hewitt, labourer, was indicted for contracting a bigamous marriage with Emma Hewitt [Willis], at Barford, on October 14 1899. Emma Willis said she knew prisoner about five months before she married him, during which time he presented himself as a single man. He lived with her from October 1899, till July, 1900, when he deserted her, and she saw no more of him until he was arrested for Bigamy in April of this year. Prisoner pleaded guilty and asked to be dealt with leniently, as he had been in gaol since April. His Lordship said that case was a very bad, in fact he did not think he had met with a worse one during his experience as a judge. He was not sure it was not his duty in so grave a case of deception and cruelty to pass a sentence of penal servitude. Prisoner was perhaps ignorant of the wrong he had done, and in consideration of his prolonged imprisonment since his arrest, he would only pass a sentence of eighteen months hard labour.’

There were additions from the trial in the Leamington, Warwick, Kenilworth and District Daily Circular, where it was reported that: ‘The Judge said prisoner had behaved ill as he possibly could to this respectable lady, and treated her as badly as he could. He deceived her for several months before he married her, and then, after having gone through the ceremony, he neglected her and left her.’

I have not yet been able to discover what happened next to George or Emma, but Sarah Ann reverted to using her previous married  name of Bowen and worked as kitchen servant in Birmingham. She died in 1920, aged 61.

Ironically, one of George’s half-brothers was later in the local news for marital relations, although more positively for his golden wedding anniversary!

Hopefully I will be able to find more soon.