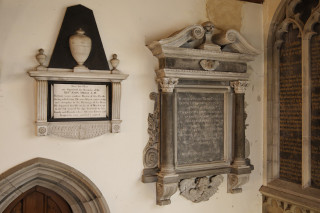 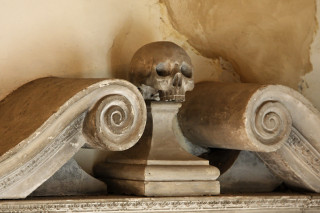 Thomas Dugard was the son of a Worcestershire schoolmaster and educated at Sidney Sussex College, Cambridge where his uncle, Richard, was an eminent tutor. He obtained his MA in 1633 and, in the same year, was appointed Master of King Henry VIII’s School, Warwick*.

* “Founded by letters patent in 1545 as a free school. In 1638 a decree in Chancery was obtained by which the Master and Usher were to teach all children born and brought up in Warwick, from the accidence to grammar, and so forwards without taking anything after they were fit to be taught the accidence.”

After remaining there for fifteen years, he obtained the wealthy living of Barford, south Warwickshire in 1648.  He continued as Rector of Barford for thirty-five years dying in 1683, aged 76,  by which time he had, by the skin of his teeth, been enrolled by the heralds amongst the Warwickshire gentry. Thomas Dugard was not considered worthy of an entry in the Dictionary of National Biography, although his brother, William, the schoolmaster, printer and ultimately Head of Merchant Taylors School, London, and his son Samuel, a clergyman and author, are included.

In the Table of Benefactions to the Parish of Barford we find the following record of Dugard’s gift to the school:

’30th May 1677 THOMAS DUGARD M A Rector of this Parish gave to certain Trustees the yearly sum of £5 for ever arising out of the rents of lands in this Parish for the benefit of the Schools. There is a certain field called the Church Piece containing £3-1-0 and also a small piece of land with fishing at Westham for the repairs of the Church’.

The sources for Dugard’s life and views include some rather patchy ecclesiastical records, mainly from the 1650’s onwards three works published between 1641 and 1664 and a large body of extremely poor verse (see example below) found as dedications in the works of others, mainly fellow Warwickshire ministers.

During his life he published “Death and the Grave”, a Sermon preached at the funeral of “Lady Alice Lucie” (born Spencer) in 1649; likewise, “The true nature of the Divine Law and disobedience thereto” in1687. In the 3rd edition of “Clarke’s Marow”, (1675) are to be found some Greek lines addressed by Thomas Dugard to the author, and in the “Ecclesiastical Martyrologie” by the same author, is prefixed a long prefatory poem by Dugard, “on our English Martyrs and Martyrologers, Master Fox and Master Clerk”, in which he thus quaintly and enthusiastically portrays the Martyrs:

Persons that deeply did abhorre
The doctrine of the scarlet whore;
And no less Protestant latitude,
Which holy Fervor doth exclude.
The narrow way they nimbly trod,
Their zeal presented them to God;
An Holocaust continually:
Not then alone when they did fry
In furious flames, and so asserted
God’s sacred truth, by most deserted.

However, according to Canon Hugh Price, a former rector of the parish, Thomas Dugard was Barford’s most illustrious rector. He was appointed register of parish records, previously always a secular office. He held the living with great distinction with a remarkable benevolence towards the humble residents, but he was, too, an eminent scholar and poet, some of his manuscripts being still under the care of the Shakespeare Birthday Trust at Stratford-upon-Avon. His talent enabled him to register in Latin, with delightful discernment, items relating to the social life in his parish. The following is an extract translated from one of his registers:

Not one person of these three pairs hath been twice marryed; and every pair of them is an honour to marriage. They all dwell together in one house, and eat together at one table. The like hereunto is hardly, if at all, to be found. So affected with the strangeness of it was the Rector of the place, that he put it into this Epigramme:

Fairfax the Fourth, is born, a gallant Boy;
Father’s grandfather’s great-grandfather’s great joy,
Under one roof these dwell, with their three wives;
And at one table eat what Heaven gives.
Our times a sweeter harmony have not known;
They are six persons, yet their Hearts but one.
And of these six as none hath hitherto
Known Marriage twice, so none desires to doe.
Mate is to mate as dearest dove to dove,
Even grandest wrinkles are still full of Love.
In those three Pairs Barford doth greatly glory,
What other place can parallel this Story?

Sir William Dugdale speaks of the above circumstance. In his ‘Antiquities of Warwickshire’. The house, Fairfax Manor, in which this happy family party lived is still standing, though in the last stage of decay. (Sadly it was demolished in the nineteenth century – Ed)

In another comment, again translated from the Latin, related to the baptism of a child born out of wedlock whose mother was, he wrote,
“Mother to many; married to none”.
Dugard’s handwriding weakened a little with the passage of years but he continued to put odd observations and fragments of verse into the registers.
One of the epitaphs again translated was:
“Whose daughter, under measles’ dangerous sway
By nurse neglected
Pined alas! away.”

Dugard’s comfortable situation in later life is shown by a tithe case of the 1650s in the course of which Dugard’s opponent declared the tithes of Barford to be worth £160 per annum; by his daughter’s marriage settlement in 1676 with a portion of £300; and by his own will which mentioned two yard lands and a house owned in Barford, plus a personal estate of almost £600 – £138 in money, £100 in books and £188 in ‘debts good’.

The North wall of the chancel of St Peter’s church bears his magnificent monument.

He is buried, with his second wife Anna, in the floor to the right side of the pulpit at the east end of the nave.

References: ‘The Worthies of Warwickshire who lived between 1500 and 1800’
by Revd Frederic Leigh Colville MA. Published Henry Cooke and Son 1869