The story of Barford's Bells 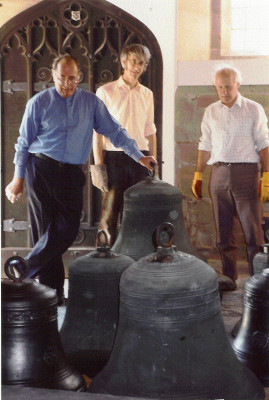 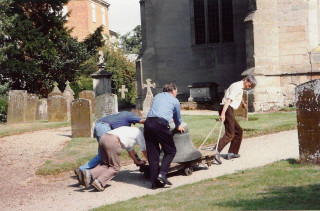 The Bells are Cast

Friday 24 June, 1994 was a significant day for Barford because on that day, at Taylor’s Bell Foundry in Loughborough, two new bells were cast for St Peter’s. In all possibility these bells will ring out over Barford for centuries to come and will be rung and heard by many generations of our successors. It is no exaggeration to say that this was a day when local history was made and the twenty five or so parishioners and friends who travelled to Loughborough to witness the event were indeed privileged.

It was a beautiful day when we were welcomed at the Foundry and given an interesting tour of the premises and the adjoining museum. We were shown how the moulds were made and how the casting was carried out. The complexities of tuning were described and we also saw the construction of the frames in which the bells will hang. Various bell fittings were on display and amongst others we saw some very large bells which were destined for Shoreditch in London.

At last the great moment arrived for the casting of our own bells. Molten bell-metal had been heated to about 1200 degrees Centigrade and, after the Rector had blessed it in accordance with ancient custom, it was poured into the moulds. When these were filled, the metal was slagged to remove unnecessary dross and then it was poured. After this the molten metal was stirred to ensure that it circulated to every part of the mould.

The Rector, benefactors and several parishioners, including some of the younger ringers, then took turns in carrying out this stirring process with a willow stick. They can all claim to have had a hand in this creation which will be handed down to posterity.

The new bells will be hung in the tower at St Peter’s within the next few weeks ready for a service of dedication. Together with four existing but refurbished bells they will constitute a ring of six bells. The two new bells will bear inscriptions recording the names of the Rector, the churchwardens and the principal benefactors, Mr and Mrs H W Dunnett, whose generosity has enabled this exciting project to become a reality.