You are here: Home>People>Reminiscences>A chat with Ian Webster and Sheila Reynolds

A chat with Ian Webster and Sheila Reynolds

Memories of a Happy Childhood in Barford 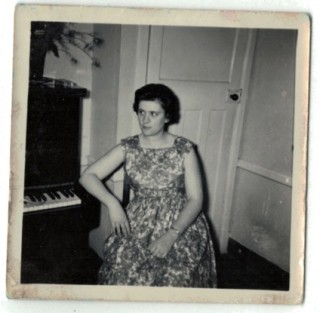 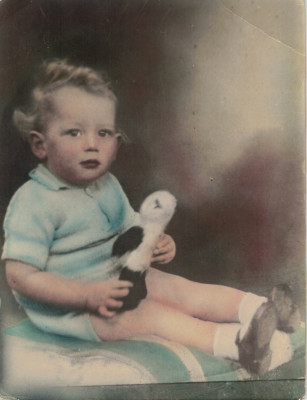 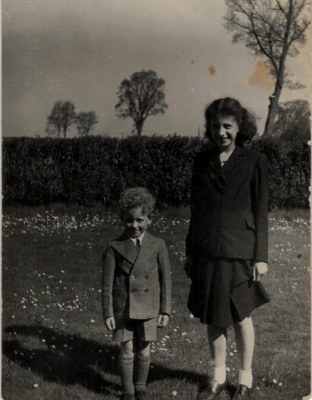 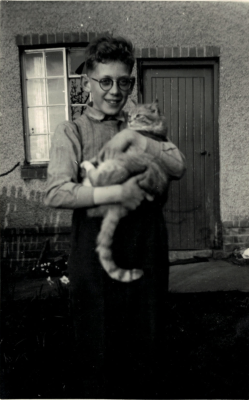 Ian Webster and Sheila Reynolds are brother and sister and have lived in Barford nearly all their lives. Sheila was born in Sherbourne in 1938 in Brook Cottages and within a very short time the family had moved to what is now Mill Lane but was then called simply the Council Houses. There were five girls Jean, Janet, Kathleen, Dorothy, Sheila and then Ian was born in 1944.

Their Dad, Frank Webster, died after a tragic accident the November before the year Ian was born. Frank worked for Oldhams which was, in those days, a small firm transporting cattle. He had just taken the children to school and called in at Shinwell’s for his tobacco when the bus stopped opposite the Red Lion (Joseph Arch). A car mounted the pavement and Frank was run over and died some days later as a result of his injuries. The family were devastated. There were now six children and no income or, of course, social help. Local people did their best to support but Sheila recalls her mum weeping as she searched for pennies down the back of the sofa. There was nothing else for it Florence Webster or Flo as she was known had to find work. Six weeks after Ian was born she went to work at Westham House in domestic and Catering work. Mrs Owen ran Westham in those days as an Adult Education College and Flo enjoyed her work. In fact she didn’t retire until she was 71!

The Mill lane House was a very early Council House with no electricity but gas lights. It had cold running water but any hot water had to be heated up in the copper,

There seems to have been a bit of a health hazard in having a bath as the copper was surrounded by a brick wall and the only way to get the water out was to ladle it into the bath!

There were no toilets inside but a bucket privy outside that the ‘Lavvy’ man came to empty. The only form of heating was coal and cooking was done on a very early Aga-type appliance. (House bricks were heated in it to warm the beds) There was a pantry with a cold stone and the meat safe was kept under the rabbit hutch down the garden! Everyone in the family shared the jobs such as emptying the ashes, cleaning windows, bringing in the coal and at eleven years old doing their own washing and ironing. It sounds a hard life but it was a very happy one. Sheila and Ian can both remember coming in from school on the bus from Hugh Clopton in Stratford or Oken in Warwick to a great pile of toast toasted over the fire and spread with marg.

The moment when the dog ate the jellies setting for some important occasion in the bathroom (this being a cool place) is remembered with great enjoyment.

One of their least favourite jobs was collecting firewood. This was made particularly difficult when the local farmer who lived at the bottom of Bridge Street told them to put all their sticks back.

Grandad from Sherbourne came to live with them for some time and as he was handicapped he was given the village bath chair. This was used as a great vehicle by the children who narrowly missed death on a number of occasions by rolling it down Mill Lane and not being able to stop it, ending on the other side of the main road by the shop wall. This they look back on with some irony as it was where their Dad was killed.

The barber came regularly to Thompson’s Yard to cut men’s hair for 1/2d and Mrs Sarsfield did the women’s hair. There were great areas to play in down by the mill, the Estate Yard which is now Wilkins Close, The Rifle Range beyond the current fishermen’s car park and Phil Hammond’s Yard where all the joinery was done for the Smith Ryland Estate. Flo was often given out a handout of lime wash to freshen up a room.

The family had their first T.V. in 1959 – from Radio Rentals and their first holiday at Clacton. Mrs Owen from Westham House paid for them to stay for a week in a converted bus. It was April and it snowed, but it was brilliant. They couldn’t get enough of the sea. Disaster struck towards the end of the holiday as they ran out of money and when the coach arrived at Pool Meadow, Coventry, they had to appeal to Jean for some money to get them home!

Other outings included a visit to Abbey Fields in Kenilworth where the equivalent to the Royal show was held.

Mrs Nancy Taylor or Mrs Outing Taylor as she was known ran the ‘outing club.’ This funded a trip to the seaside, a visit to Wicksteed Park, the Panto and something called the Birthday show at Coventry, Hippodrome. There was also an Ice Show.

There was always a Red House Christmas Party and Sheila remembers Bernard Harris being the butler there. After the demise of the Red House he became butler at Stoneleigh

There was an aptly named “sick and divi” club run by Mrs Ada Wall (Jack’s sister) of Keytes Lane. .If no-one was ill you got your money back and a dividend payment!

The family weren’t ill much but Sheila got Diptheria and had to be sent to Heathcote isolation hospital. She also got peritonitis. The whole family caught scarlet fever.

In Ian and Sheila’s young life Mr Dick Hemming, the mill owner, was known as a real gentleman and his wife Beatrice (Beattie) was equally well thought of. They lived in what was later to be the office of the old mill and then moved to the Malt house(in the days when the Malt Barn was a barn).

Mr Twigger, School Master, was a force to be reckoned with. A strict disciplinarian living in the School House. Mrs Twigger however was apparently very nice.

Archdeacon Parr was very highly regarded and loved. Mrs Parr was equally committed to the village and did sick visiting. Apparently everyone fancied Mr Dunstan, the curate, who was “dishy”

The school itself, as Ian and Sheila remember, had fires in the middle of the room and mats to sit on. Mrs Calvert, Miss Charles and Mrs Sarsfield were the teachers. You were only allowed out at playtimes so there were a lot of “accidents“ in the infants. A big heap of coal was left on the yard so of course the children used to play on it and get pretty grubby. The Nit nurse visited regularly and Ian remembers the older boys spending a lot of time on the school allotment (produce was sold). They both remember their bottles of milk frozen solid in the winter.

Nurse Randle and Miss Shirt lived in the old Toll House. Nurse Randle was the district nurse and seems to have sorted out cuts and bruises, childbirth(including Ian) and babies and Sheila swallowing a stone! Miss Shirt, they think, was a dressmaker.

Transport was mainly by bus. The 2.30 and the 3.30 to Leamington were caught by the house that is now called Dragonyard (only one came back at 5.0pm). Both Ian and Sheila remember it as a good and reliable service and they tell the story of having to go to Simms in Swan Street Warwick to have the radio accumulator recharged with acid. Of course the only way to get there was by bus. Apparently it was easy to tell exactly who had been given this job by the small burn holes in their clothes on the return journey to Barford.

The children walked to Sherbourne to get milk from Harrisons. The family got coal from Hinsons and their household wares such as saucepans, paraffin and scourers from the hardware van. Everything they needed was close at hand. Indeed The Bakehouse sold the ”tastiest iced buns”. Mrs Carter (opposite Gladstone terrace) sold wool and haberdashery and next door to her was a shop selling fruit and veg. This was Mrs Webb who also sold wonderful frozen “jubblies” made from orange squash for ½d.

There was Saturday cinema for 1d in the Memorial Hall and a funfair once a year on the playing fields.

Ian and Sheila’s memories are of a poor but very happy, close-knit childhood with a great deal of fun and a lot to value.