You are here: Home>People>Reminiscences>Tea with Mrs Iris Barlow

A Reminiscence of old Barfod 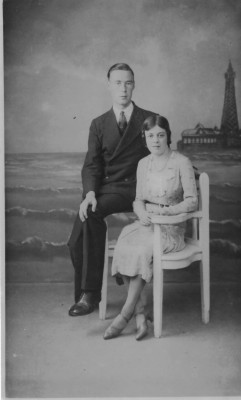 Harry and Iris Barlow in Blackpool

Mrs Iris Barlow, born 1912, was daughter in law to Mr Charles Thomas Barlow and Mrs Amy Barlow of Hareway farm Barford. This was a tenant farm and the Barlows farmed it from before the war until the 1970s. They had two sons, Harry, who was a solicitors’ clerk and then became an insurance clerk in the N.F.U. (National farmer’s Union) and Jack who ran the farm with his father. There were two sisters in law – Mary who was married to Jack and Iris who married Harry and subsequently lived in Stratford. These are some of Iris’ memories of the village over 70 years ago when Harry was 21.

The family had lived at Blackhill Farm before moving to Barford. Charles was a bailiff and the family had originally come from Knowle. Amy was used to not having to work and indeed had a maid to help with the ‘rough’ work. The family moved into number 17 on Bridge street while work was done on Hareway Farm and Iris and Harry used to take Jack across the fields at the back of the house to the river to teach him to swim.

Iris was working as an apprentice dressmaker at Mrs Halls workroom along Loxley road in Stratford during this time but they married from the farm with Iris’ family coming from Hill Cottage Snitterfield.

Iris’ early memories of the farm include ‘granny’, as Amy was called, having a char or charlady at the farm This lady seemed to have spent a lot of her time in the wash house where the copper, mangle and dolly tubs were kept. Amy did the cooking for family members and workers and also cleaned eggs in cold water which were not only eaten but sold to Phipps the greengrocers in Stratford. The cleaning lady was also paid partly in eggs.

During the War years these eggs were exchanged for other foodstuffs for example cheese. In fact a highlight of Granny Barlow’s life seemed to have been her weekly trip to Stratford. This involved a cycle trip to the village to ‘Insons’ and then catching the bus. The reverse was true, only laden down with bags. The Coop was a favoured shop for bacon and also Ferrises which was a sort of delicatessen.

Life then, seems to us, rather hard but Amy managed a holiday most years to Weston-Super-Mare or Blackpool. Indeed one year she was joined by her husband, for whom it was quite an adventure as most journeys took place on trains.

Before World War 2, days were spent around fairly routine things. One of the regular happenings was mushrooming. Everyone got up early to mushroom and filled containers of mushrooms to be collected on Hareway fields by a lorry.

Canning fruit and veg from the garden was very popular. The canning took place in a house along Wellesbourne Road but some of the results could be dodgy particularly blown tins.

Bottling was another way to preserve food as was salting, for example runner beans. The farm of course had no fridge in the early days and cream and other such foodstuffs were kept in the Dairy along with the meat safe.

One beast a year would be sent to Hadleys down in the village rather than the to the local market. This was sold to the butcher but whenever anyone from the family was sent to buy meat they were exhorted to ask for meat from the beast that had been raised at Hareway!

The farm must have been a chill place. There were only coal fires and water heated from the range to wash in. Bath day tended therefore to be once a week.

There was electric light at the farm but very few plugs! The first hoover had to be plugged into a light bulb socket! An early electric fire that was bought could not of course, be used.

Illnesses did not seem to figure much in people’s lives. Grandad Barlow had suspected Scarlet Fever and had to go to Heathcote Isolation Hospital for a short while and Granny Barlow had a gall bladder operation and had a long recuperation period but these seem to have been the major problems apart from childbirth.

The village nurse lived in a cottage somewhere around the back of the church. She acted also as midwife and health visitor

Bikes were the commonest form of transport and it was nothing for members of the family to cycle into Leamington to do some shopping or to visit the Cadena café where you could have your tea and listen to a live orchestra. There was even ‘bike parking’ at the bottom of the parade for which you paid the princely sum of 2d.

Of course you did not have to travel far to get all your requirements. The village before the war had Hadleys the butchers, Mrs Shimwell’s “Emporium” where gifts and all sorts could be bought, a woolshop that was in the house currently belonging to the Hunt family (48 Church Street), a bank, a Post oOfice and a bakehouse.

Iris currently lives in a new cottage built on the site of Billy Bacon’s (painter and decorator) storage space which was part of the old the Working Men’s Club .This is next door to ‘The Loft’ which was an old barn or hayloft.