The war memorial in the village of Barford is set into the wall surrounding the churchyard of St Peter’s church, at the corner of Church Street and Church Lane. Five stone plaques are set into the wall; the three central ones commemorate World War I and two smaller ones either side of this, World War II. This section of the wall is heightened and a stone cross on a triple plinth rises from the top of the wall above the plaques. 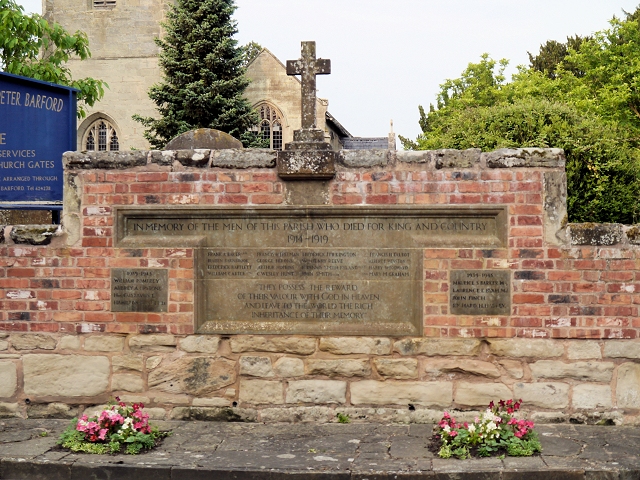 The dedication on the World War I plaque reads

The names of the fallen are listed below this:

and are followed by the words

THEY POSSESS THE REWARD

OF THEIR VALOUR WITH GOD IN HEAVEN

AND LEAVE TO THE WORLD THE RICH

INHERITANCE OF THEIR MEMORY

The two World War II memorial plaques have the dates 1939 – 1945 and record names of the fallen.

The original (World War I) memorial, was first unveiled on Sunday 18th September 1921. By 2003 the old bricks had deteriorated beyond repair and the stone plaques were becoming illegible due to spalling which necessitated significant restoration work. The restored memorial was rededicated prior to the Remembrance Day service on Sunday 9th November 2003.