An interesting object discovered while looking for something else 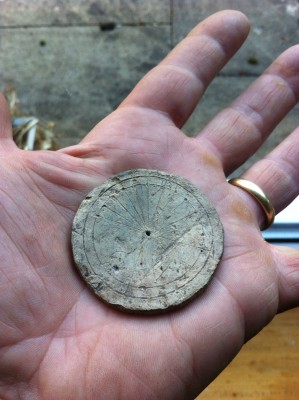 This is the story of an interesting object discovered while looking for something else. Kirsty had thrown some weeds into a nettle patch, and realised that her wedding ring was missing. cue David  Beaumont from Kineton with his metal detector. Two hours later we had a large area of nettles cut down, and had amassed several ring pulls, a tarnished pound coin, a few nails and a round muddy object. The wedding ring appeared a week later in the bottom of the shoe cupboard. The round object was a home made sundial, probably a bit over 300 years old.

The dial is a disc of lead, about 1/8″ thick and 2″ diameter. One side is unmarked, the other is engraved with lines, circles and numbers. The photo shows the object, the drawing is a schematic diagram of the engravings.

We showed this to John Davis, of the British sundial society, who made the following observations:

How might this sundial have been used? It will not have been much use for measuring how long anything took, but it would allow a particular time of day, say time for lunch or time to stop work, to be defined.

This type of wall mounted sundial is sometimes referred to as a ‘Mass dial’ because larger versions than this were often mounted on the south facing wall of a church to tell the parishioners when it was time to attend mass.

So we imagine Mr Charles Ward, mill owner, employing some workers on a day rate,  and making ( or perhaps having his blacksmith make) this sundial. He then finds a suitable tree, cuts a blaze on the south side of it with an axe, and pins the sundial to the tree. The workers are allowed home when the shadow reaches 6.  The sundial stays on the tree until the pin rusts, and is then lost.