You are here: Home>New contributions>Reminiscences of a Childhood in Barford

Reminiscences of a Childhood in Barford 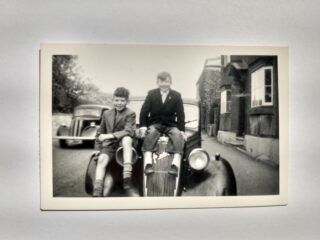 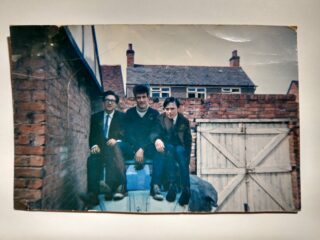 Church Street Cottage
My family (my parents, myself and two sisters) first moved to Barford in 1951-52, at age three or four, into a small cottage at No. 1, Church Street (which later became No. 2 due to a municipal or GPO renumbering scheme).

When I say cottage I mean cottage; water was from either the pump in the garden or a smaller one in the kitchen. No electricity, although we did have gaslights – little white domes and a naked bluish flame. No indoor plumbing; a no-fun-in-winter outhouse, and stand-up baths. The house had cost £500.

To our left was a builder’s storage yard, and then a magnificent Cedar of Lebanon at the corner of Church St. and Wellesbourne Rd.

School
I attended the local school (St Peter’s, Barford) at more-or-less the same time as Clive Byerley and had the same teachers that he has already written about.

As an aside, I was allowed to start school a little early as my best friend, Roger Jones, had already started. And I could read – honest!

Since Barford was largely an agrarian community, the curriculum was basically the three R’s, [Reading, wRiting and aRithmetic]  and anything rural or agricultural. We were taught the difference between a blackbird and a black bird – sometimes there isn’t one ha-ha-ha.

We learned the Norfolk 4-crop cycle – I can’t find Norfolk on a map, though. Further, the school also maintained an allotment; we learned weeding with a dutch hoe; we learned turning the soil; we learned many things that back then were considered character-building but have since been legally recognized as child labour.

Ralph Sadler
In order to ensure that a public right-of-way did not lapse, Mr Twigger frequently led us on a walk from Church Lane to Hareway Lane through Ralph Sadler’s fields.

Ralph Sadler was a gentle, old-school and slightly quirky character, and we became the kind of companions that generations-apart people often are. He was a semi-retired farmer with six or eight dairy cows, a ram and perhaps three ewes, an apple orchard and half-a-dozen beehives. He owned Ben, a shire horse that once or twice a year we would hitch up to a wain to bring hay down from the barn.

As a tweener, I would help him in a general kind of way; mucking out the milking shed, harvesting the apples etc. He taught me how to collect honey, and how gentle the bees really were. Every day we moved an electric fence to open up a few new feet of pasture for the cattle.

One year, there was a slight kerfuffle over the electric fence as it had to be strung across the right-of-way, and some new yuppie types complained to the council about it. It was a single strand that you could step over or duck under!

Anyway, it all died down in the end.

In Winter, once a week I would go to the farmhouse and Ralph and I would play chess with his marvellous “Staunton” chess set, wear-polished and patina’d and loved for many, many years. Eventually, we started a village chess club – maybe six members that played in a room above the Working Men’s Club. [in Cedar House, Bridge Street]

Shops and Services
There were only a couple of stores – “shops” back then, of course – whose names I’m sorry can’t recall. Just around the corner, on Wellesbourne Road, there was a small grocers and general purpose shop with room for perhaps four adult customers at a time (“Cedar Cottage”?? – I’m guessing). Most importantly for us children it was where we bought our four-a-penny blackjacks, often two at a time because we only had a ha’penny!

Further along was the bakery, selling only bread and sweets as far as I remember. It was where we spent our Sunday allowance on a 2oz cone bag of 100’s & 1000’s – we were too young to know, but sweets were still rationed back then. And if you’ve never had a slice of fresh-baked and still-warm crusty cottage loaf…

Situated at the junction where Bridge Street becomes Wellesbourne Road, there was Brian Steed’s garage. I’d frequently have to go and get a gallon of paraffin for small heaters which we used to heat rooms where there was no fireplace.

I think there was a Post Office toward the bridge end of Bridge Street.

We didn’t have a spreading chestnut tree, but on High Street we did have a smithy – and a mighty smith, Mr. Worrall.  We’d sometimes watch him shoe a horse, wondering why the nails didn’t hurt.

Once a year there was a village fete, “Lady Howard’s Garden Party” [46 Church Street] with all the traditional and lovely games and contests: Bowling for a Pig, Guess How many Jelly Beans, How many clothes pegs can you carry in one hand? Damn, I wish I could remember more.

A gentleman who lived in a large house somewhere on High Street [The Malt House] had quite a large collection of birds and occasionally opened the aviary to the public – I loved going there, but really only remember the fantastic crowned cranes.

On Sundays we’d go and watch inter-village cricket, on a field on Hareway Lane. A friend of ours, Ronnie Barlow, was on the team and took a fair – or unfair – bit of ribbing about his performance. He took it, as we intended it, with a good-natured grin.

Pubs
As teenagers we hung around on the opposite side of the road from the Granville Arms [Wellesbourne Road].  They had a small hatch where we could purchase soft drinks, which was probably Coca-Cola or lemonade.

Aside: On my 18th birthday, at that hatch, I bought my very first “legal” pint!

Originally called the “Red Lion”, the Joseph Arch had a bar and a lounge, although we generally only went into the bar. Once a year, the Joseph Arch hosted a group (or is it a “jingle”) of Morris Dancers. It was never advertised in advance, but word would fly around the village and we’d all run down to watch.

The Working Men’s Club, on the corner of Church Street and Bridge
Street, was where we played darts. There were also Billiard tables in
the upstairs rooms, but as far as I know these were never used until a
“new” village policeman started a Youth Club in those rooms.