You are here: Home>Places>The Red House 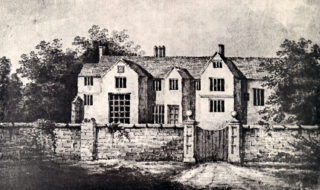 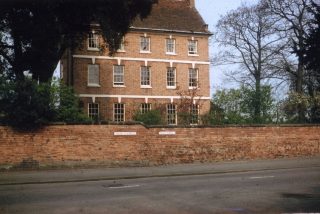 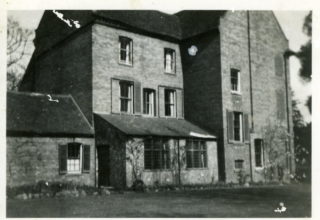 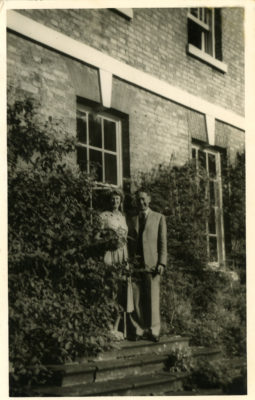 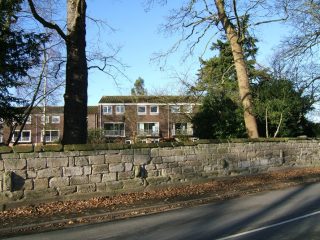 In 1545, following the closure of Thelsford Priory, Barford Grange, the monastic farmhouse and land, was sold to William Pynnok.  It later came into the possession of the Ward family. The ancient sandstone wall fronting the site has enigmatic carved outcrops which are thought by some to represent the heads of the friars.

The Leas were followed by the Willis family. Their butler was Bernard Harris who had 3 children – Tony, Sheila and a disabled daughter.  It became derelict and was demolished in  1960s  The present award-winning Red House Estate, designed by Professor Denys Hinton, lies off Verdon Place. Verdon Place was so called because it was the site of a second ancient manor house owned by the Verdon family who held a manor  from 1212 until 1385 and since then it has been held by Lord Willoughby de Broke and the Earls of Warwick. Opposite the church, traces of the original sandstone wall may be seen. Where the wall ends was a drive down to the river where the school children were invited each year to gather chestnuts.

A long sandstone wall opposite the church marks the boundary of the site of successive ancient properties long since demolished. It has been suggested that the unusual stone projections along the wall are the weathered remains of carved heads of the friars who occupied the Grange, or monastic farmstead, of the Thelsford Friars. Where the wall ends there was a drive down to the river where the school children were invited each year to gather chestnuts.

After the dissolution of the monasteries by Henry VIII, Thomas Ward(e), a successful lawyer, purchased the advowson and the Glebe Lands from the Crown. Thus from 1542 the Ward family was effectively the leading landowner, until they were overtaken by the Mills family. Thomas Ward or one of his descendants built a timber-framed house known as Barford Hall on the site of the Priory Grange. In 1674 the house was described as having nine hearths. In the Hearth Tax returns of 1674 a John Ward is paying tax on one hearth.

The Revd Thomas Ward was an historian and illustrated many Warwickshire houses in the early 19th century. His drawings confirm that the house at this time was very ancient. It was entered through a porch and the rooms were wainscoted in small panels. There was a large hall, on either side of which was a parlour. The old dining room had painted walls which would have been similar to those of that century which have been renovated in Shakespeare’s Birthplace. At the end of the 18th century this estate was sold to the 2nd Earl of Warwick by Charles Ward (an army officer and cousin of the historian Revd Thomas Ward).

The ownership of this manor seems to have passed into the hands of the Earls of Warwick. George, Earl Brooke of Warwick leased it to John Fairfax and his wife Susannah. The manor came with ‘2 gardens, 2 barnyards, barns, stables, yards and backsides, 80 acres of land, 10 acres of arable, 20 acres of pasture and rights of common pasture and appurtenances’. In a further document it states that this property was more or late used, occupied or enjoyed by John Fairfax and his mother Elizabeth Fairfax. As well as all the above they also ‘enjoyed all those two several allotments and use of an enclosure of late open and common fields and common arable lands’ This would be a reference to the 1760 enclosure. Some of the field names mentioned are East Sandy Way, Hither Alderham, Lamas Way and Westham Close
Sometime after this, the house came into the ownership of John Whitehead. He is likely to be the person who demolished Barford Hall, the old manor house, and built the large, red brick Red House with sash windows, as mentioned in the memoirs of his granddaughter, Sophia Greaves. It was reputed to have been built for a wager in only three weeks but this seems scarcely credible. John Whitehead, a very wealthy Quaker, was a banker, farmer, woolstapler and estate agent, with large land holdings. The Quaker movement was formed by George Fox in Leicestershire in 1670. We know from his letters that John Whitehead was friendly with other prominent Quaker families at this time such as the Galtons of Birmingham. This group of the Society of Friends formed the first anti-slavery society, called the Lunar Society. At this time Quakers were not allowed to enter parliament or go to university but engaged very successfully in business. Tragically, five of Mr Whitehead’s children died in infancy and his wife said that she did not want to have a son as it would mean that her husband would leave his daughters paupers – an extreme example of primogeniture or the common-law right of the first-born son to inherit the entire estate. There exist letters from his niece, Sarah Burlingham, housekeeper to her Uncle in 1821, to John Southall regarding the family.

Robert Webber Lindsay lived in the Red House for many years in the late 19th and early twentieth century. He was born in Wales and at the time of the 1881 census he was unmarried, aged 43. He was chairman of the Parish Council in the late 19th century.

Mr and Mrs Lea and their family moved to Barford in 1947. Mr Lea worked in a long-established family firm of estate agents in Birmingham.  His brother who used to visit them at The Red House was Sir Colin Thornley – Governor of British Honduras before becoming director of Save the Children Fund. Their son, Brian, was sent to Shrewsbury School then Cambridge to read estate management.  At 21 years old he was accepted as a Church Missionary Society candidate. For a year before beginning his theological training he worked on a local farm where they bred Aberdeen Angus cattle to gain practical agricultural experience. During that year he helped with St Peter’s Sunday School and ran the youth club which met in the freezing cold barn close to the Rectory now known as Dragonyard.  In the summer he helped run a church-based holiday in a large rambling house at Polzeath, Cornwall. For many of the young people in those post-war years it was the first seaside holiday that they had ever experienced. After his parents’ marriage foundered, Brian’s father remarried a widow from the Malt House, Molly Payne. Brian writes: “she and her three sons came to live with us in Barford joining forces with my father, my brother Richard and me.  The seven of us formed a happy and lively new family unit in a large rambling house with a grass tennis court, conveniently situated opposite the village church”.

The Leas were succeeded by the Willis family whose butler was Bernard Harris. Eventually the Red House became derelict and was demolished. In the1960s, the present award-winning Red House Estate, designed by Professor Denys Hinton, was built. It lies off Verdon Place, so called because it was the site of a second ancient manor house owned by the Verdon family. They held a manor  from 1212 until 1385 which since then has been held by Lord Willoughby de Broke and the Earls of Warwick.

Family moved to Barford in 1947 and Brian sent to Shrewsbury School then Cambridge to read estate management.  21 year old accepted as CMS candidate.