You are here: Home>Topics>Barford Guides

The 1st Barford Guides Company was formed in 1928 with Mrs Watson as the founder leader assisted by Miss Shirt and the earliest surviving photos are of their summer camp in 1930 at West Runton, on the North Norfolk coast.  They had been on camps for the previous two years but this was the first year under canvas. 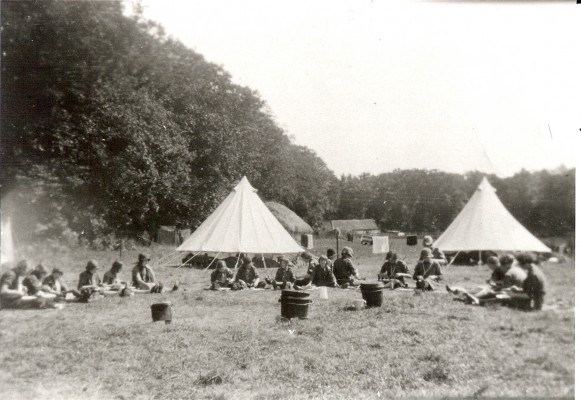 Mrs Vi Harding joined the company in 1923 when she was 14. She was in Kingfisher Patrol and became a patrol second. Mrs Harding remembers that Mrs Watson the founder leader was very nice, Miss Shirt on the other hand was remembered as being rather strict. The  guides met on Monday evenings at the school and always wore their uniforms which were blue dresses with blue and green triangular ties, hats were also worn these being rather big. They learnt useful things like First Aid. They went on hikes, had camp fires and played team games. They went away to camp each year. Mrs Harding gained her needlework badge.She left the guides after 3 years because she was too old, having joined later than usual. She said she will always keep her Promise Badge.

Mrs Joan Inson joined the original company when she was 14, she was in Kingfisher patrol and was a second for a while, being a shy girl she was not keen on being a second and gave it up. Joan went to camp only once at Kenilworth and really enjoyed it, however after leaving school at 15 she started work in the Post Office and was not able to get time off to attend more camps. Mrs Inson remembers the uniforms as navy blue smock dresses with long sleeves. The ties were blue on one side and bright green on the other and were folded to a tie shape with the Promise badge in the middle to hold it down. The hats were round with a large hard brim which she didn’t like, as being rather small herself the hat looked very big. Joan liked the team games and relay races best and enjoyed them more than the useful things they did. Although they met mostly at school in the summer they were sometimes invited to Mrs Watson’s house “Woodlands” on Hareway Lane where they played in the spinny,   sometimes they went to the “Red House”. Mrs Inson left the Guides when she was about 17, she felt she had outgrown it. 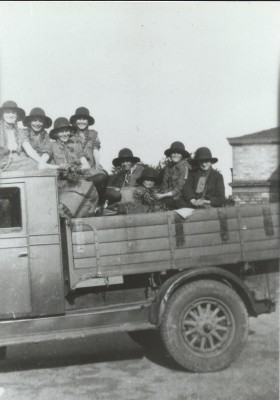 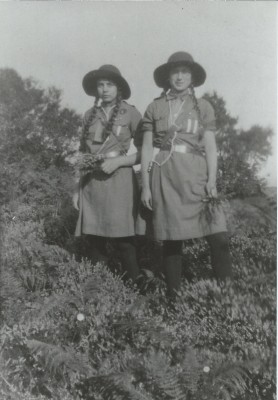 In 1933 a formal photo was taken of the girls who were the original members of the Company, some of whom had by then left the Guides.   The outside of St Peter’s Church was used as the background for this. 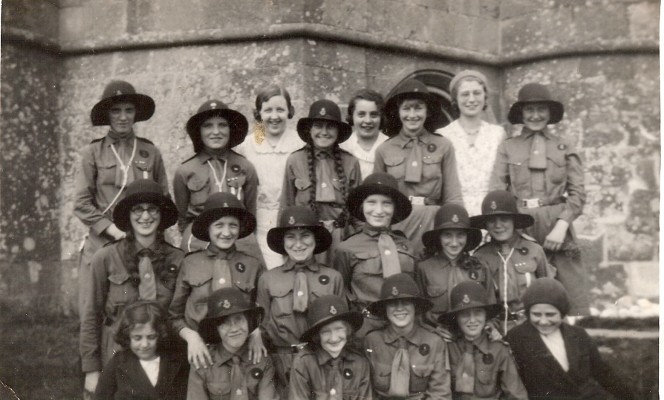 The Company lapsed towards the end of the 1930s, as did many other organisations with the threat of war looming, but it was restarted in 1944.   Miss Barnes, (Mrs K Jones) took up the leadership in 1947 and the Company continued very successfully over the next years with a camp every year in places ranging from Devon to the Isle of Wight and to Wales.   The first camp after wartime travel restrictions was in 1947 at Hartland, Devon.  This photos show how much they were enjoying themselves; also that the photographer had  a very good eye for a picture. 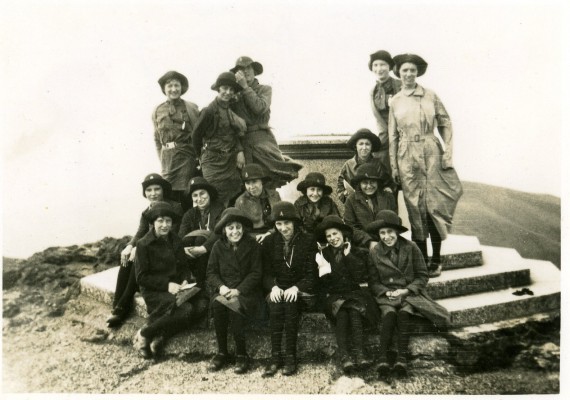 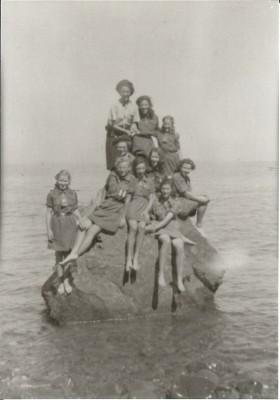 A formal group photo of the Company in 1953 includes a number of people and families still living or remembered around the village. 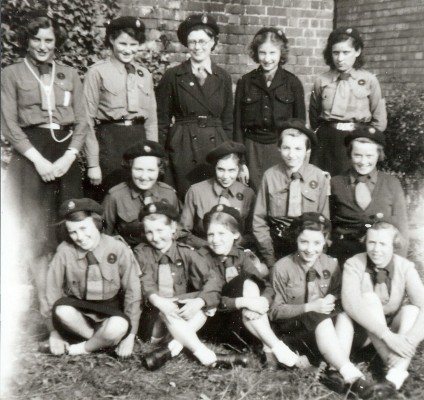 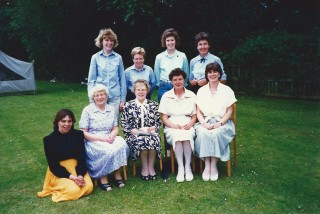 When Miss Barnes retired in 1957 there was a brief lapse and it was re-started by Miss Mary Hemmings  in 1958 who ran it for 17 years.During that period the Company was busy with its normal activities, regular parades and camps, even going overseas sometimes.

In October 1961 the 1st Barford Rangers was formed for the older girls.   The Guides continued with regular camps and parades during this period including their 40th Birthday Parade in July 1968. This picture, probably taken from the area where the Scout Hut was built some years later, shows them on their way from Wasperton Lane to the Church.  They were led there by the City of Coventry Scout Band. 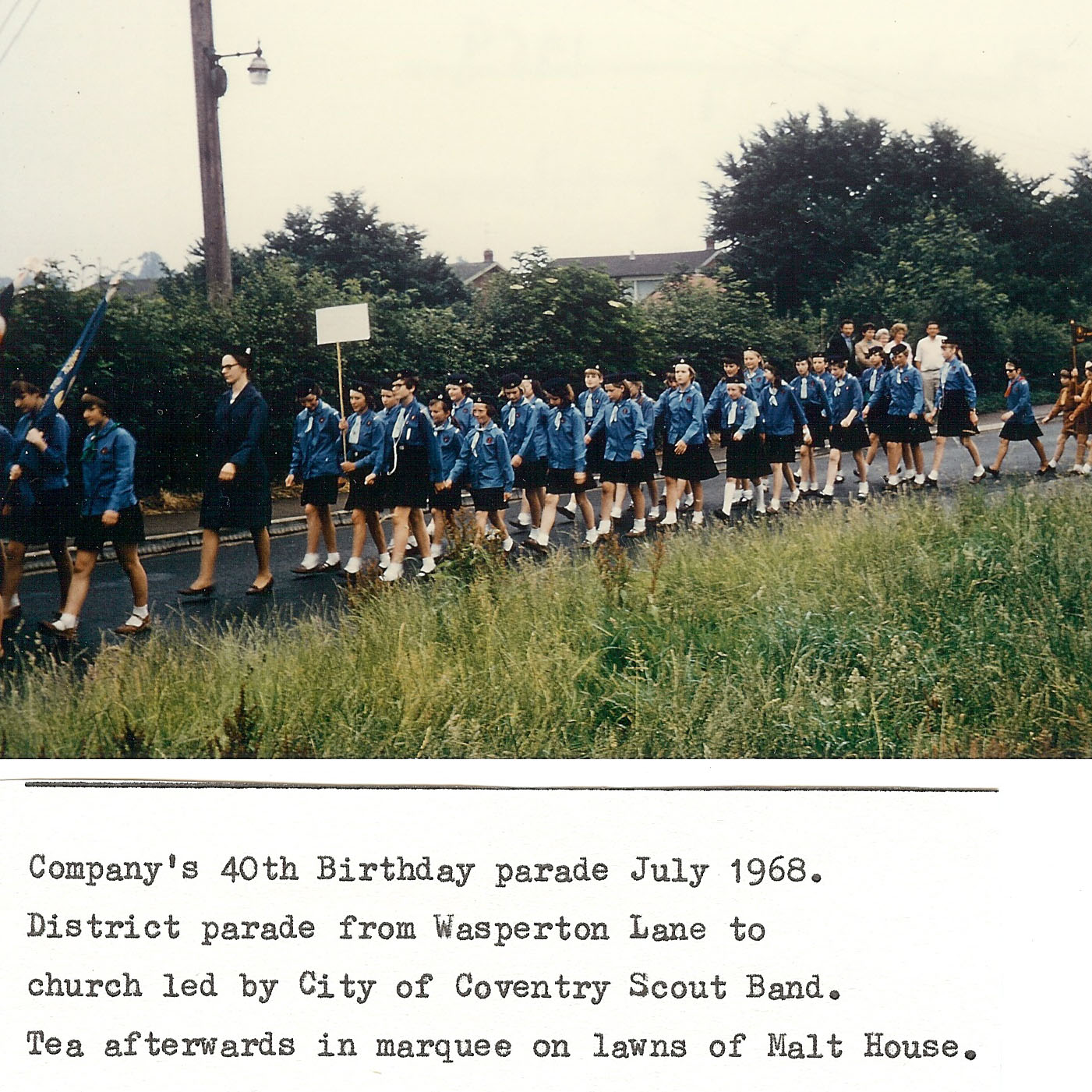 Mrs Rosemary Anderson took over the Guides in 1975 assisted by Mary Pierson and later her daughter Elizabeth.  Mrs Hilary Maynard took over in 1982 and ran a very successful Guides Company for a number of years. There were some joint activities with the Scouts such as an Annual Litter Pick and when the Barford Guides invited the Barford Brownies, Scouts and Cubs to a barbecue to celebrate the 75th Birthday of the Guide Movement. 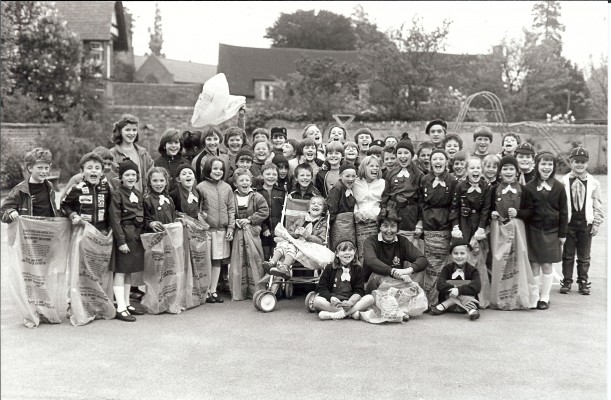 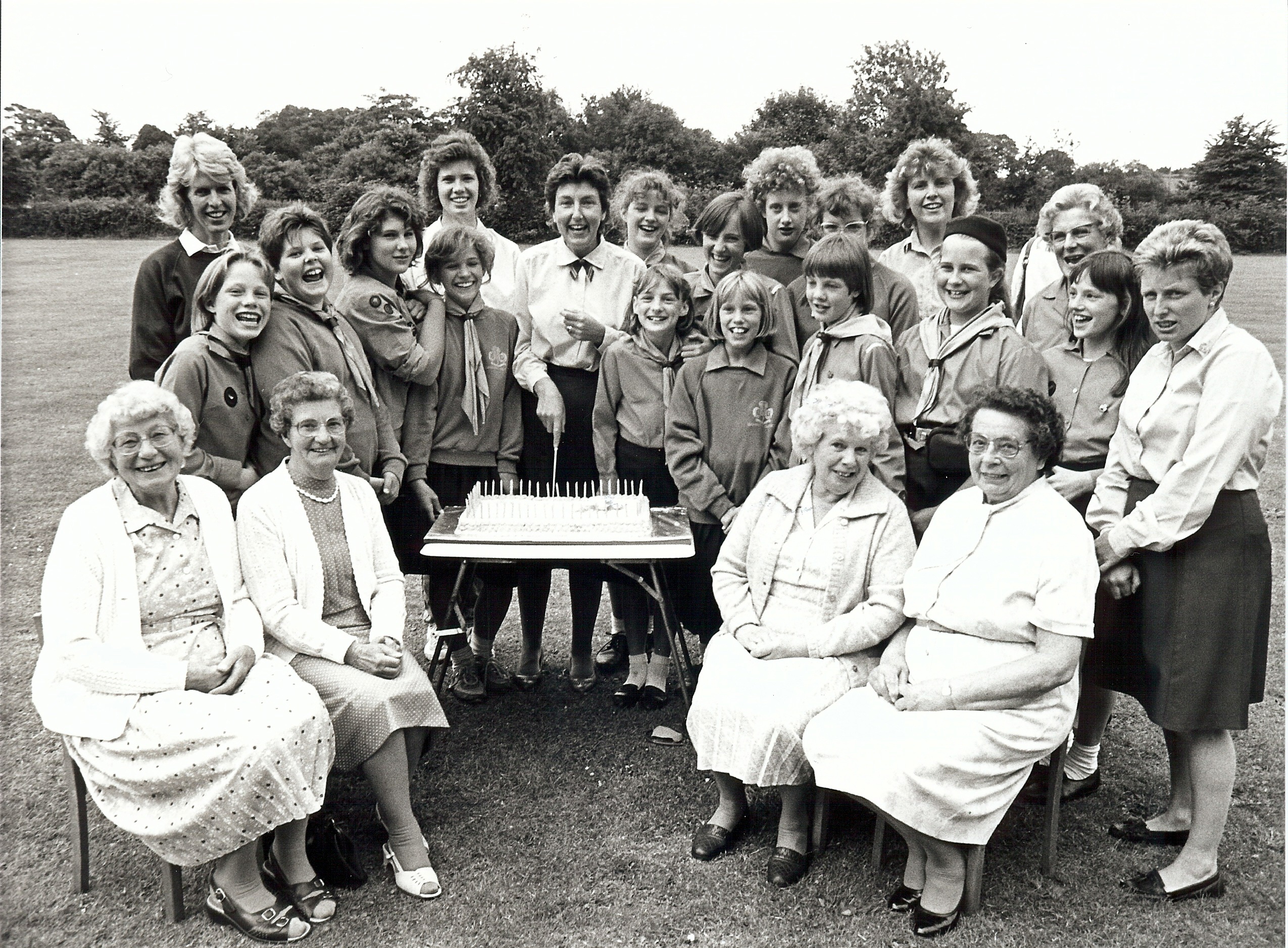 Foreground not in uniform are Kath Jones, Joan Inson, Florrie Wall and Vi Harding all guides from the original company.

Over the years the Guide’s meetings took place in a number of locations including private houses and the school.  In the late 1980s the Scouts and Guides worked together with a number of helpers to build a dedicated place for their meetings on Wasperton Lane near the allotments.  This was achieved by a lot of fundraising, voluntary construction work and help from many other supporters.  It was finished ready for the St George’s Day Parade 1990  which was followed by the Opening Ceremony.The Scout Hut was opened by Lady Jeryl Smith-Ryland. 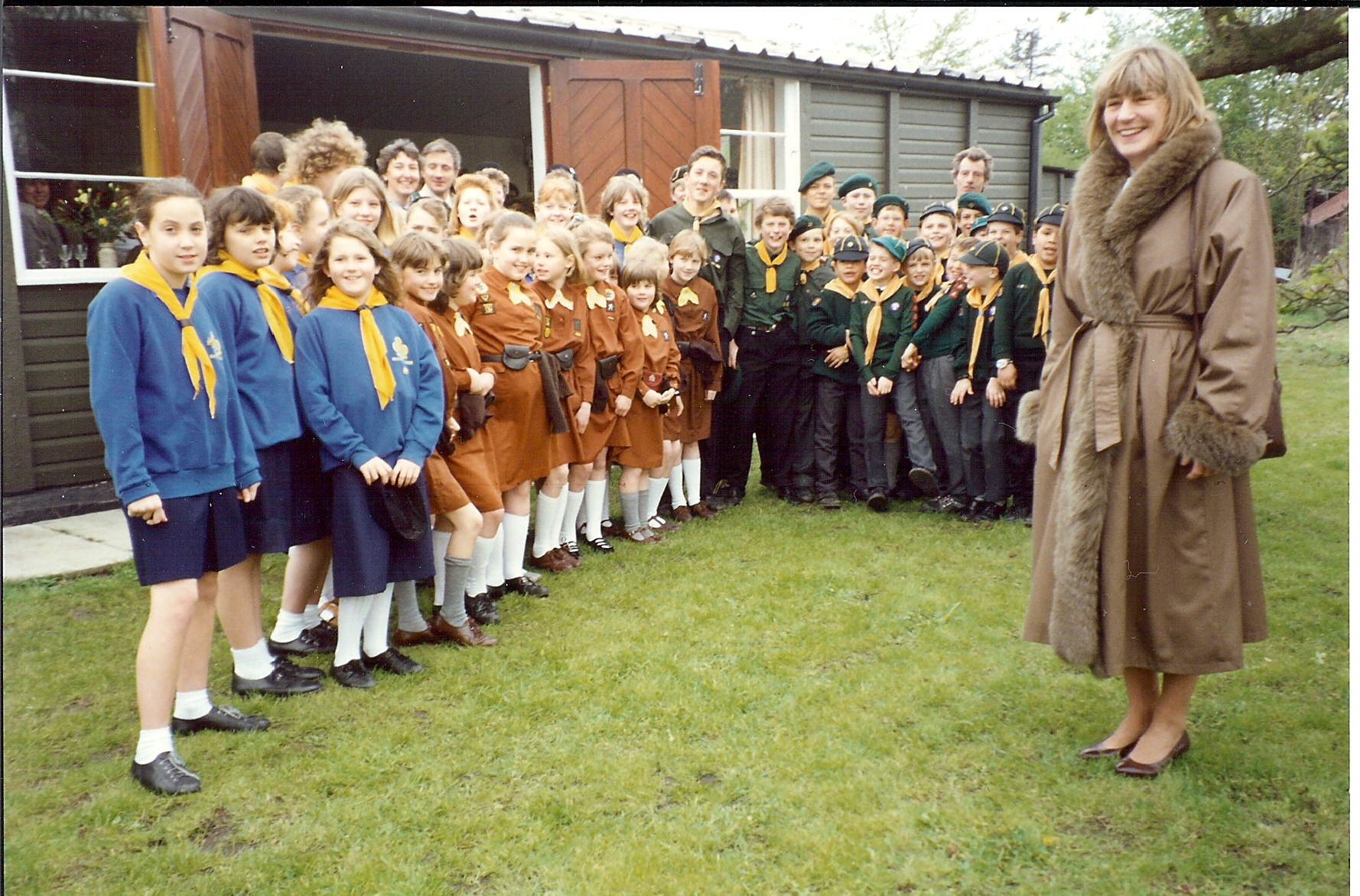 Hilary Maynard retired as Guide leader at the end of 1993 after 11 very full and successful years of service. 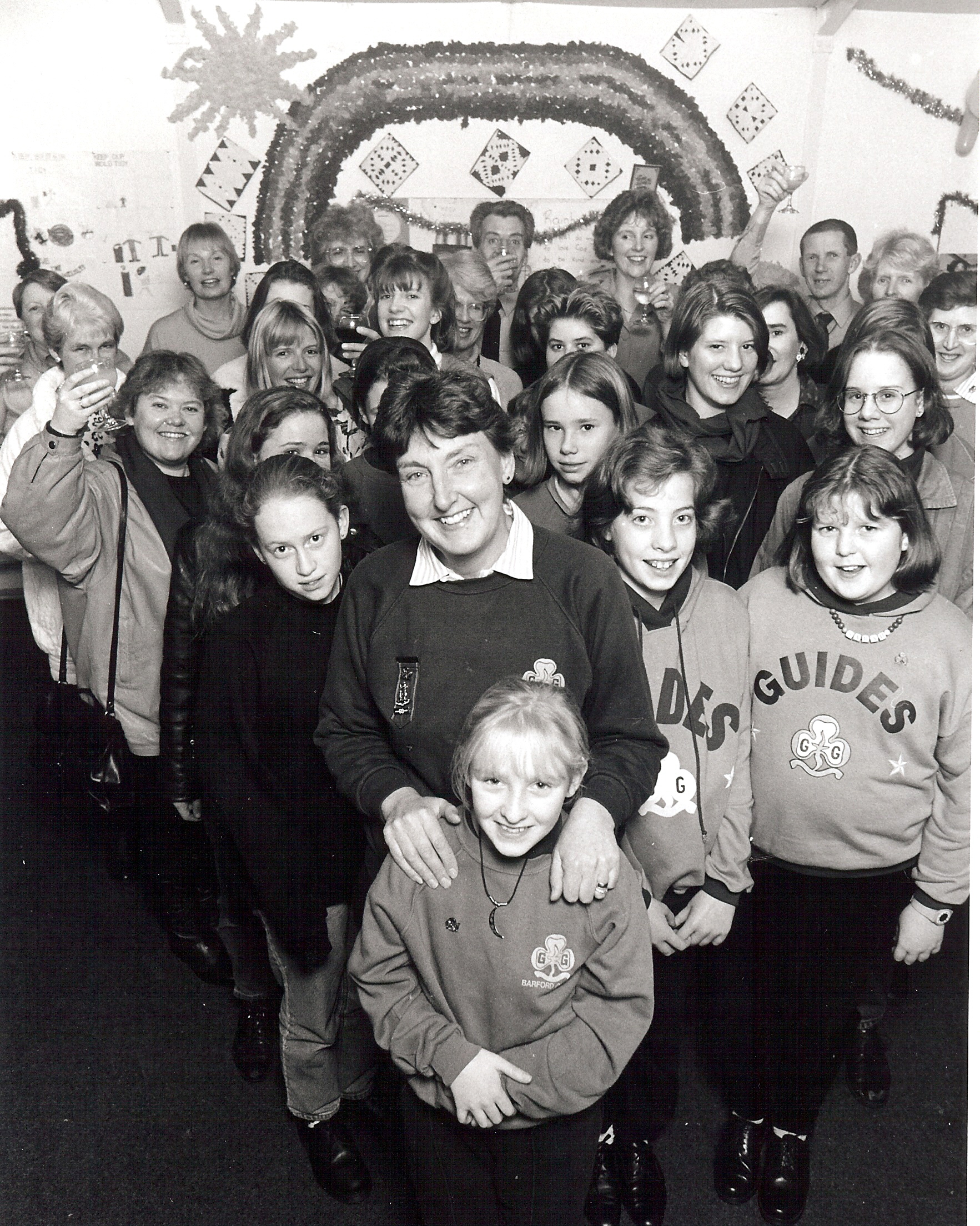