You are here: Home>Topics>The Observer Corps 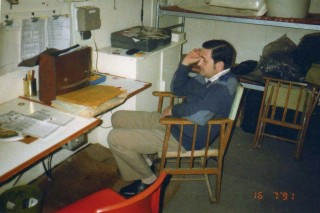 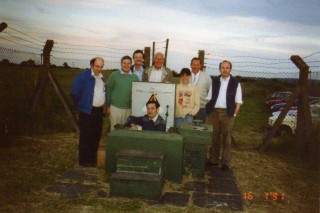 Left-right- Richard ?, Bill Taylor, Chris Potter, Harry Robbins, ?, Dick Robbins, Jim Hawtin, and Roger Malin in the shaft. None of these men were from Barford they were from Leamington Spa & Southam. 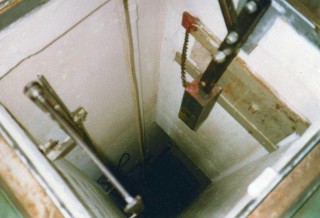 The post on Wasperton Hill was built in July 1959 and continued until  September 1991 with a short break between October 1968 and May 1969  when all the other posts in the area were closed. It was a master post for four others and was linked to them by phone and also to the Police Station at Leamington Spa. It was also in radio contact to headquarters near Rugby.

Members of the Corps would man the post on a fortnightly rota during the summer  taking part in exercises and maintaining the post. Shifts lasted 8hrs and 3 men were on duty at each shift. Weekend shifts lasted 24hrs. If during a shift an emergency occurred the men stayed down in the post until the emergency ended. Food packs and water were supplied in 12 x 10 gallon water containers. These were changed on a rotation, one each month. Had there been a nuclear war the men would have stayed locked in the post until the food and water ran out.

The post was supplied with a chemical toilet and the job of emptying this was very unpopular as it had to be hauled up the shaft by a rope . There were also bunk beds where the men would take turns to rest during a 24 hour shift and facilities to make tea and light meals. Some of the posts were not heated at first and were extremely damp but the Wasperton Hill post was dry and had a heater.

In the winter  the men met at the Dog Inn at Harbury.  They were not paid but received travelling a allowance.

One of the pieces of equipment used was a nuclear fallout monitor which would indicate raised radiation levels in the event of a nuclear explosion somewhere in the country. This acted as an early warning signal. Had there been a war the post would have been manned full time.

On one occasion during the 1980s when the post was being manned a Police car with sirens blaring arrived at the post demanding to know who they were and what they were doing.  The men explained that they were Observer Corps and the hole in the ground was their post. The Police  said that they had never heard of them and it wasn’t until they were taken down into the post and shown the phone which connected them to Leamington Police that they were believed.

Apparently some young girls had seen men  mysteriously disappearing down the hole and thinking they might be IRA had phoned the Police!

In charge of the Wasperton Hill post was Roger Martin,  from Southam, who joined the Corps in 1962. He was originally attached to the Harbury post but  that closed in 1968, as did Wasperton Hill.  A rethink by the Air Ministry reopened a reduced number of posts and in 1969 Wasperton Hill became a Master post. Roger was put in charge until the final closure in 1991.

He attended two garden parties at Bentley Priory where the Queen met many Observer Corps men.  On both occasions the Queen spoke to the man next to him but not Roger, much to his disappointment.

He received his long service medal after 12 years and a bar for a further 12 years.

The post is now empty and has been sealed. The landowner does not allow access to the site.