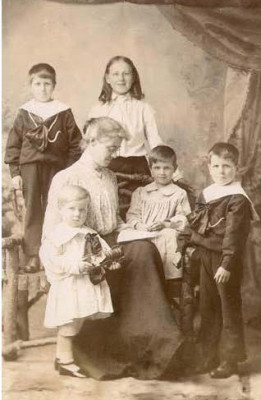 Eleanor Archer was born in Warton and educated at Hunningham. Her father, Joseph, was a farm bailiff. Susannah, Eleanor’s mother, had been headmistress of Priors Marston girls’ school. From an early age Eleanor won prizes for her writing and from 1879 her contributions appeared in “Kind Words” and “Young England” magazines. Eleanor moved to Sherbourne shortly before the death of Louisa Ryland, who was then living at Barford Hill House. Miss Ryland was so impressed by articles that Eleanor wrote in the “Cassell’s Family Magazine” that she presented her with a work basket. Eleanor also contributed articles to the Warwick Advertiser and to the ‘Gentlewoman’.

Overseer of the Poor of the Parish of BarfordIn 1893 Miss Archer became assistant overseer of the poor in Barford. There was of course some Barford dissatisfaction with this, “Fancy a woman wanting to do a man’s job!”. The Parish Council minutes show that she often had to almost beg for her pay. The Vicar of Sherbourne, Rev. W. Tomkins, refused to give her a testimonial as he said it would make her the most hated person in the parish. As part of this role she collected the taxes and census returns. She was made of stern stuff and continued working in Barford until 1928, receiving an annual salary of £20 from the Parish Council. Her journeys around the village provided her with humorous material for her newspaper articles, one of the shopkeepers would not pay her rates until Eleanor bought something from her shop!

During her time in Barford she got to know and admire Joseph Arch. She lived in his house for five years when he was a Member of Parliament for Norfolk. There is a lovely letter he wrote to her inviting her to visit the House of Commons and it has quite a romantic tone.

Eleanor was a great educator of women. She was employed by the Warwickshire County Council Dairy School from 1894 – 1898. She used the Viavi Gynaecological Plates to educate women about their reproductive organs. She also ran a servants’ registry from her house in Warwick between 1910 and 1920.

Eleanor Archer belonged to the Temperance Movement and was deeply religious, a member of the Band of Hope.

In retirement Miss Archer lived for many years in Warwick, knitting jerseys for the Navy, during World War 2. She died in Warwick Hospital in 1960.

For much of her long life Eleanor kept a detailed diary and this is now in the County Record Office in Warwick.